August 20th, 2019
Summary:
Since our investment note in April, equity markets have trended flat to positive. We are now seeing a slightly more worried picture around the global growth outlook. This can be seen in falling long-term government bond yields, the inverted U.S. yield curve, the slowdown in global trade, and weak global manufacturing surveys. We believe that the growth outlook will begin to deteriorate towards the second half of the year. 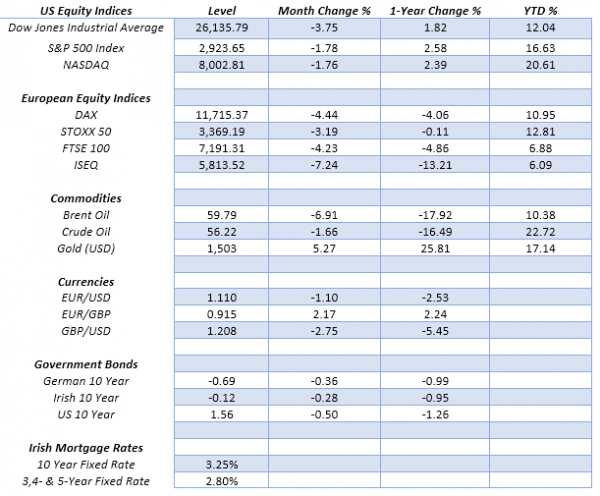 Markets have been turbulent over the last month with the Dow Jones Industrial Average falling 3.75%, while the Standard & Poor’s 500 Index lost nearly 1.78%. The NASDAQ Composite gave back, 1.76%. While European markets have also traded lower, the STOXX 50 slid 3.19%, the DAX tumbled 4.44% and the FTSE 100 weakened 4.23%.
The S&P 500 is trading at 17.2 times 12-month forward earnings. This is versus the 10-year average of 15 which is very expensive, there is a massive premium.
The case for caution is the trade-war uncertainty and the collapse in global trade which is really impairing things and we think that’s very important at the moment. Looking at two of the world’s best broad indicators, and that’s Germany, which accounts for roughly 12% of global trade, and Singapore the trade hub for Asia. The German 2019 GDP forecast has collapsed from 1.9% a year ago to 0.7% now, it’s quite an extraordinary downgrade.
The most recent manufacturing PMI, at 43.1, in Germany suggests a recession is likely coming there, or it’s certainly a high risk. The manufacturing PMI has been in contraction territory all year. Germany is not only the most important economy in Europe, but it’s also dependent on trade and therefore a great broad measure.
If we combine what is happening in Germany with Singapore which is such an open economy, it captures what’s going on in Asia. Electronic exports most recent reading has seen a more than 30% annualised decline. And that’s for two consecutive months. We’ve not seen such a drawdown since the crisis.  Additionally, Q2 GDP in Singapore came in at minus 3.3% versus plus 0.5% expected. That’s the worst quarterly reading since 2012.
Interest rates and Bond Yields
As we stated in our April note, ‘If the Fed cut rates back to zero funds rate, it would not be an unreasonable forecast to make that the 10-year yield would fall back 1.5 per cent and the 30-year long bond would at least get to 2 per cent ’.
Since then the US 10-year treasury yield has fallen from 2.493% to 1.56% while the 30-year long bond has dropped to 2.172% from 2.046%.
The Fed, which dropped its target rate to a range of 2 percent to 2.25 percent in July is expected to cut rates in September and then again in October. Trade tensions loom, business sentiment and capex have softened further, global growth remains weak and inflation expectations have fallen, while the inversion of the 2-year US Treasury Note and 10-year U.S. government bonds implies overly restrictive monetary policy. So, we expect US yields to fall further.
If we look at just relative yields, relative returns around the world, there’s been this flight out of Japan, out of Europe, out of negative yields, and it’s gone into the US sovereign bond market, it’s also gone into corporate and Junk bonds which have performed strongly.
As we are aware, reaching for yield never ends well. If we look at junk bond yields with 5-6% nominal face value yields, with no covenants on the bonds coupled with extremely high leverage among corporate America, there is a cause for concern.
Focusing on Europe, the spread between the yield on 10-year Italian bonds and 10-year German Bunds has started widening. At 218 basis points, the spread is still well below the peak of 330 basis points reached during last year’s crisis. Although, the euro area’s third-largest economy appears to be heading for early elections as soon as October after Deputy Prime Minister Matteo Salvini withdrew support from the coalition government. If League leader Salvini comes out on top after early elections he will attempt to deliver on his aggressive tax cuts and new investments he has promised his supporters. This will undoubtedly lead to a breach of the EU’s 3% deficit limit and as a result, expect further market turmoil.
In Germany, the PMIs, the ZEW, the IFO Institute are suggesting the economy is in deep trouble. Our worry is the ECB do not have anymore ammunition. They’re going to cut rates another 20 basis points which is what’s priced into deposit rate future market, this will take it to minus 60 on the overnight deposit rate.
Equities
As a result of the above, European bank shares are largely at their lows, in fact they’re at multi – decade lows (see chart below). This poses a significant risk to the European economy. 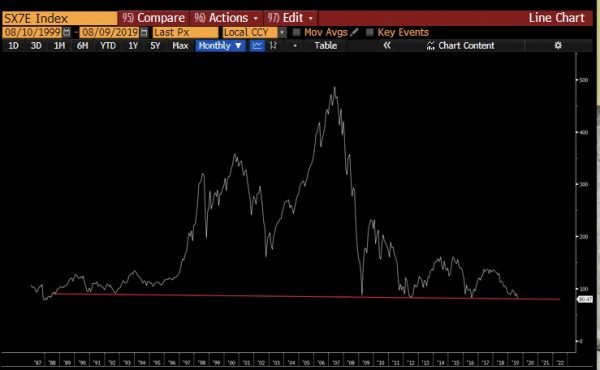 Chart source: Bloomberg
European equities are close to fair value while core government bonds are long-term expensive with the 10-year German Bund yielding -0.69%. Exports to emerging markets account for nearly 10% of Eurozone GDP, which means further deterioration in global trade poses a significant risk.
We are broadly neutral to slightly underweight view on global equities. Our preferred equity sectors in the current economic environment are Technology, Cloud Services companies, Utilities, Healthcare, Consumer Goods and REITS. We are also looking to invest for the long-term in blue chip high dividend yielding stocks with low beta.
We continue our overweight preference for US fixed income mainly long duration bonds & treasuries, with an underweight view on high yield corporate credit.
We continue to advise our clients to combine a tactical approach with a strategic longer-term allocation approach to preserve capital in volatile markets. In our view, compounding wealth depends not on chasing returns but avoiding permanent losses.
In summary, all the high-frequency data such as retail sales, industrial output, and PMIs suggest that contraction is ongoing. It’s evident there are clear problems for all the big trade indicators. The ripple effects of further trade-war escalation are unpredictable and potentially significant. For these reasons, we are concerned about global growth primarily based on a manufacturing and trade situation.
On the other hand, if we see a continuation in Chinese economic stimulus, global central bank easing, an extension on Brexit or a trade war cease-fire, then a rebound in the global economy later in the year is possible.

Seaspray Financial Services Ltd trading as Seaspray Private is regulated by the Central Bank of Ireland. Seaspray Financial Services Ltd is authorised as an investment business firm under S. 10 of the Investment Intermediaries Act 1995 (as amended). The firm is also registered as an insurance / re-insurance intermediary under the European Communities (insurance Mediation) Regulations 2005 (as amended). The firm is an investment product intermediary holding letters of appointment from investment product producers such as insurance companies and banks.  The company’s regulatory number with the Central Bank of Ireland is C165527.

WARNING: IF YOU CASH IN A FIXED TERM PRODUCT BEFORE THE MATURITY DATE YOU MAY LOSE SOME OR ALL OF THE MONEY YOU INVEST.